This year's event attracted a full entry which again proves the popularity of the rally.

Conditions were typical of the Dean stages very slippery after heavy rain overnight a real test of man and machine for the 7 stages.

Sadly, the expected battle for overall victory with the locals didn't materialise as Matt Hirst and Declan Dear followed up there 2019 win with a comfortable victory and with it the Pirelli Welsh rally championship in Delta Salvage Fiesta R5, 47 seconds was the winning margin ahead of Ledbury youngster Rob Wilson's Ravenol backed Lancer Evo 7, Wilson and co-driver Martin Haggett put on a fabulous show for spectators and thoroughly deserved runner up spot.

"It just didn't happen for us today, it proved again how good the R5 cars are, congratulations to Matt & Declan, credit to Rob he drove very well to 2nd, but we'll take 3rd on our home event, just great for everyone to have the rally back again."

Rounding out the top 5 was Bob Morgan and Adrian Williams in the Winner Garage Skoda Fabia R5, again another crew tipped for top honours on home soil the battle with Elsmore never materialised but still gave them another good haul of Welsh championship points.

"That was great fun, really slippery and greasy, just so nice to be back in these forests let's hope the history of the event can continue now." said Cliffy.

Another pair of veterans Jeremy Easson with his Littledean based co-driver Mike Reynolds now in a new Escort RS1600 had an excellent run to 14th and 3rd in class.

Husband and wife duo Nigel and Karen Jenkins dominated their class in the NJ Autos Vauxhall Nova finishing 16th overall and winning the class by over 2 minutes.

" Nigel drove very well, but it was great to see so many people out watching and thank you for all the support, fabulous to have the rally back. "

Another crew to have a good run were Hartpury's Geoff Phelps with local boy Colin Jenkins calling the notes, despite a last-minute scare with oil pressure issues they took 21st overall 3rd in class,in the Hills Property Consultants Escort RS1800.

Charles Hopkinson had a very good run in his Dave Jenkins Motorsport run Escort RS1800, with another veteran onboard in the shape of Herefords Alan Jones the duo took 28th overall.

Luke Watts together with Matt Rogers in the Ian Watts & Son MG ZR produced another good drive to 43rd & 4th in class showing no ill effects after his recent Woodpecker Stages roll.

"Great rally so many people out watching thanks to everyone for their support, especially Nigel Jenkins for his help getting the car together for the event, let's hope the Wyedean us back to stay."

Event sponsor Richard Cole together with Matt Nicholas another to have late drama, when the throttle cable snapped on the freshly prepared Escort, but they had an enjoyable run to 46th & 8th in class.

Dave Troughton went 4wd this time in a new Subaru GC8 and together with Jordan McKenzie took 48th overall, just 4 seconds back were fellow locals Keith Bounds and Kevin Watkins switching back to another Impreza after a year in the Mini challenge they took 49th overall.

Just 10 seconds back in 51st place was Mike Truman with Martha Howells calling the notes, these two survived a huge scare on the last stage when it so nearly ended in tears, but they survived.

A huge thanks must go to Mike for all he does to help the event.

Another pair of veterans Paul Simmonds and Mark Wheeler took 58th and 4th in class in the QEP backed Escort.

For those not fortunate enough to make the finish were

Roger Matthews &; Tom Marrott in the Escort RS1600 this duo was going very well just outside the top 10 when diff failure put then out on stage 5.

A Forest of Dean Motor Club spokesman said." It's been another great Wyedean, delighted to see so many people out watching which proves the popularity of the event, and what it brings to the area, we've had messages from people here for the weekend never seen a rally before saying absolutely loved it, what date is it next year."

"A huge thanks to everyone who has made this classic event happen when all seemed lost, so let's hope the Wyedean is back to stay for many years to come".

All information, including Spectator locations can be found on the Wyedean Rally website

Lombard Rally Festival Chepstow Racecourse is the South West and South Wales' one day historic rally car demonstration event in 2022.
Running on the mainly tarmac roads, with a short gravel section, at the Racecourse, on Saturday 27th August.
Lombard Rally Festival Chepstow Racecourse | Facebook
Contact tim@lombardrallybath.co.uk     or    07860 462138
Please note: This is not a Motorsport UK permit event, you will be going at your own risk, or with organisers own liability insurances. The Forest of Dean Motor Club has no connection with this event.

Here is the link to register :-

Come along next time anyone and everyone welcome.

All small section of vehicles - the Mini sounded fantastic when she departed :) 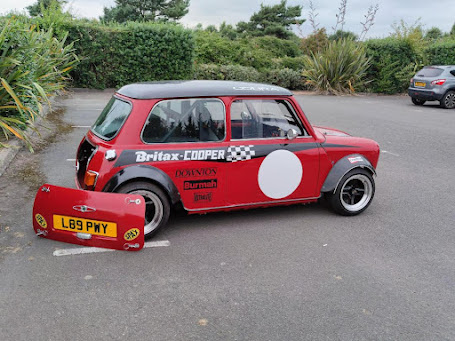 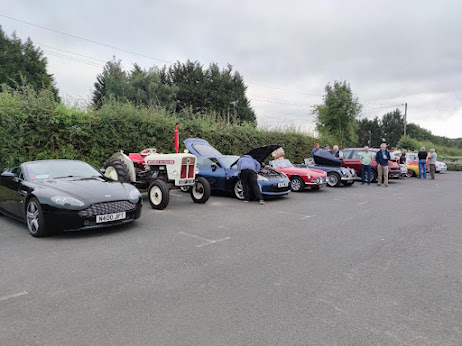 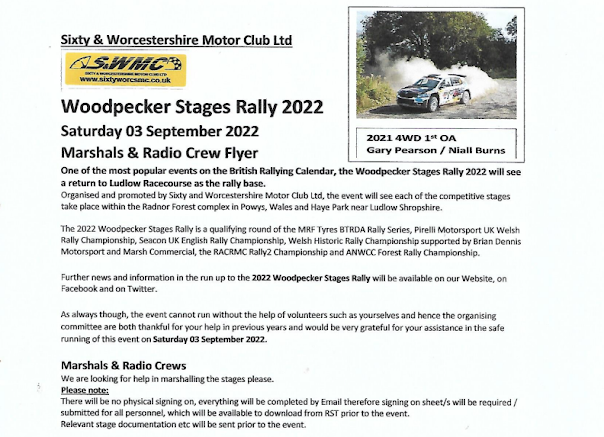 This year we are using Rally Stage Team for registration -
https://www.rallystageteam.co.uk 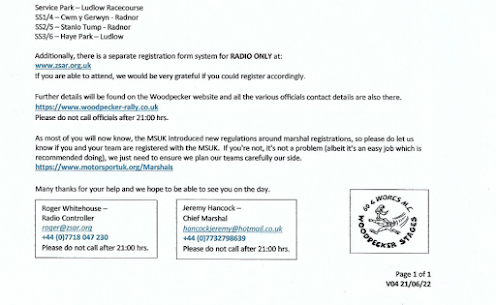